Republicans cutting taxes would be “the end of the world…Armageddon,” said House Minority Leader Nancy Pelosi days ago. This could certainly be the end of her world, because Democratic Party power comes largely from taxing and redistributing to its voters the earnings of Republicans. 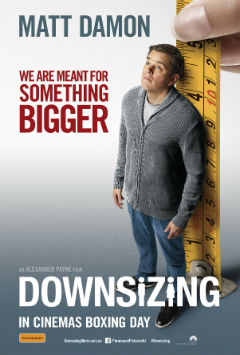 Congressional leaders of both parties understand that their money and power have come at a terrible cost to America’s liberty, prosperity, and individual independence. To make itself big, government has made many of us small, like the people who decide to save money by being shrunk to 5 inches tall in Matt Damon’s insightful forthcoming movie “downsizing.”

We are headed for the end of America, as our nation’s Framers dreamed it, if our citizens cannot make their courage and self-reliance big enough to force our government to be small again – small enough to fit inside the Constitution.

Look what we have become. Instead of honest hard money, our dollar has been turned into “an elastic currency,” as the enabling legislation of the Federal Reserve called for. Now our government simply prints as much as it wishes to spend, leaving us to pay for this with the invisible tax of inflation.

Today our central bank, the Fed, aims deliberately to create 2 percent inflation per year – which would mean that your savings lose 20 percent of their purchasing power every 10 years, and 80 percent of their worth or more over a 40-year life on the job.

But according to a new measure by the New York Federal Reserve Bank, its “Underlying Inflation Gauge” (UIG), for the past year real inflation has been running close to 3 percent – devouring your earnings and savings purchasing power at a rate of 20 percent in less than 7 years, and shrinking your working life savings by at least 80 percent in less than 28 years.

How much will you need to retire one day? Even if you have saved a $1 Million nest egg, according to CNBC, this would provide you only enough to live less than 12 years in Hawaii, and barely 16 years in California or 17 years in states such as New York, Massachusetts, Connecticut, Maryland, or Oregon.

And these calculations were done assuming 2 percent inflation, not 3 percent. Your Social Security payments are supposed to have Cost-Of-Living Adjustments (COLAs) to protect you from your dollars losing value to inflation, but during 8 years of Barack Obama’s Administration COLAs were reduced essentially to zero, even as hamburger and gas prices doubled or worse.

Government, you see, has its own problems. The politicians have already looted $2.66 Trillion from the Social Security Trust Fund. Pension funds for government employees were underfunded by many trillions of dollars. Many millions of Ms. Pelosi’s voters have saved little or nothing, expecting (as her class warfare rhetoric called for) that others would be heavily taxed so they could continue to ride through life for free.

The price of everything (especially the voters Pelosi pays to buy her party’s power) keeps rising. To Progressives like Pelosi, you can always get by with less – but what government takes and spends is non-negotiable and can never be cut (except Constitutionally-authorized defense spending). You will be further “downsized” by taxes so that obese government and its cronies continue to grow larger and fatter.

No wonder that Millennials hope not for wages but wagers on get-rich-quick Bitcoin and lottery tickets. No wonder that some financial advisors now predict that the legalization of California marijuana businesses on January 1st will make investors rich – even as it makes Pelosi’s Golden State stoned and deluded.

How long until California imitates Hawaii, where those using medical marijuana have just been ordered to surrender any guns they own because they are no longer in their right minds? This is the way the free world ends – with a toke and a Bitcoin token as its new highest values. As comedian Steve Martin joked, “Let’s get small.”
————————————————————————————————————————————–
To schedule a fascinating interview with Lowell Ponte, a former Reader’s Digest Roving Editor, contact: Sandy Frazier at 516-735-5468 or email [email protected] .

For a free copy of Craig R. Smith and Lowell Ponte’s latest book, Money, Morality & The Machine, contact: David Bradshaw at 602-918-3296 or email him at [email protected] .

Ten steps to crypto-tyranny: The “big plan” by the globalists (and how it involves Bitcoin)

In summary, here’s one possible plan by the globalists to seize total control over the world’s money supply, savings, taxation and financial transactions while enslaving humanity. (And it all starts with Bitcoin.)

1) Roll out the NSA-created Bitcoin to get the public excited about a digital currency.

2) Quietly prepare a globalist-controlled cryptocurrency to take its place. (JP Morgan, anyone?)

4) Blame whatever convenient enemy is politically acceptable (North Korea, “the Russians,” Little Green Men or whatever it takes…).

5) Allow the fiat currency debt pyramid to collapse and smolder until the sheeple get desperate (i.e. Venezuela-style desperation with people eating out of dumpsters).

6) With great fanfare, announce a government-backed cryptocurrency replacement for all fiat currencies, and position world governments as the SAVIOR of humanity. Allow the desperate public to trade in their fiat currencies for official crypto currencies.

7) Outlaw cash and criminalize gold and silver ownership by private citizens. All in the name of “security,” of course.

8) Criminalize all non-official cryptocurrencies such as Bitcoin, crashing their value virtually overnight and funneling everyone into the one world government crypto, where the NSA controls the blockchain. This can easily be achieved by blaming the false flag event (see above) on some nation or group that is said to have been “funded by Bitcoin, the cryptocurrency used by terrorists.”

9) Require embedded RFID or biometric identifiers for all transactions in order to “authenticate” the one-world digital crypto currency activities. Mark of the Beast becomes reality. No one is allowed to eat, travel or earn a wage without being marked.

10) Once absolute control over the new one-world digital currency is achieved, weaponize the government-tracked blockchain to track all transactions, investments and commercial activities. Confiscate a portion of all crypto under the guise of “automated taxation.” In an emergency, the government can even announce negative interest rates where your holdings automatically decrease each day.

With all this accomplished, globalists can now roll out absolute totalitarian control over every aspect of private lives by enforcing financial “blackouts” for those individuals who criticize the government. They can put in place automatic deductions for traffic violations, vehicle license plate taxes, internet taxes and a thousand other oppressive taxes invented by the bureaucracy. With automatic deductions run by the government, citizens have no means to halt the endless confiscation of their “money” by totalitarian bureaucrats and their deep state lackeys.

How do you feel about your Bitcoin now?